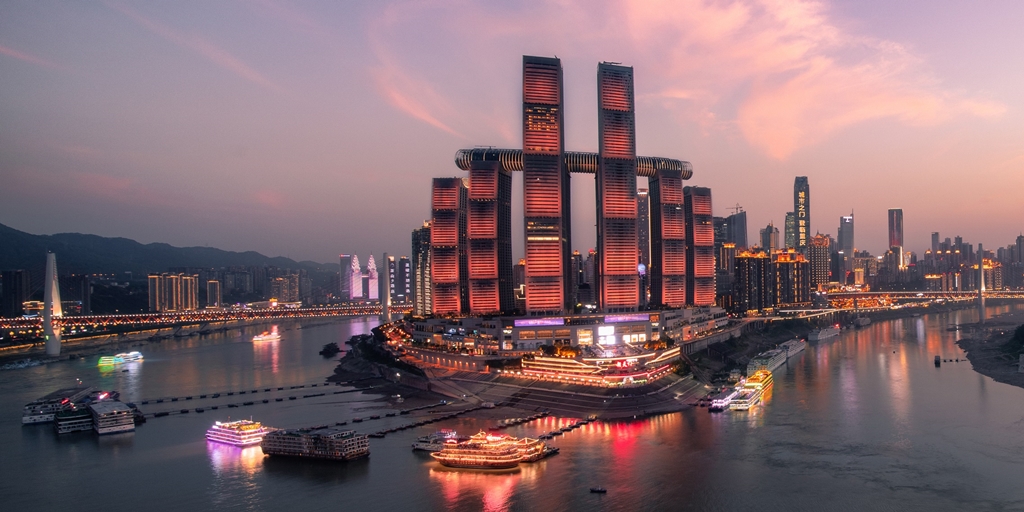 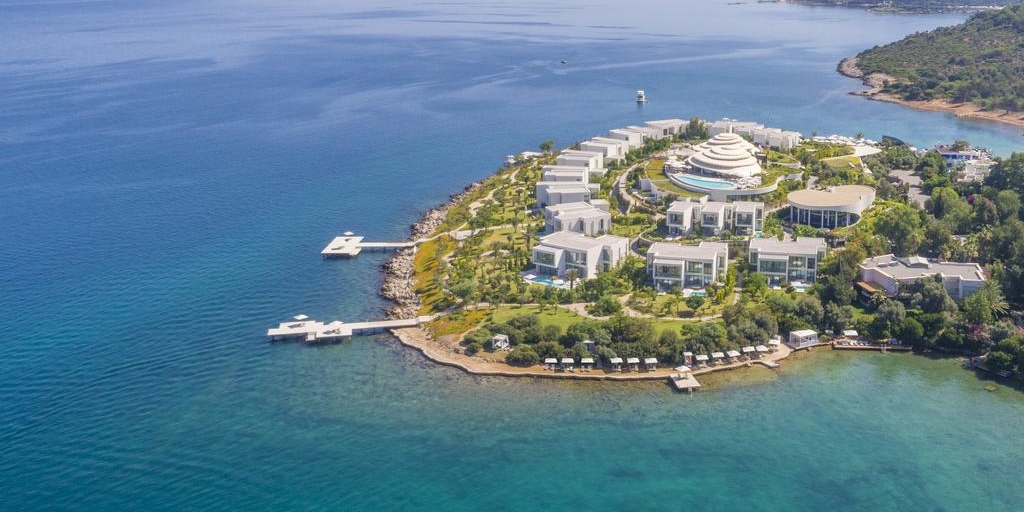 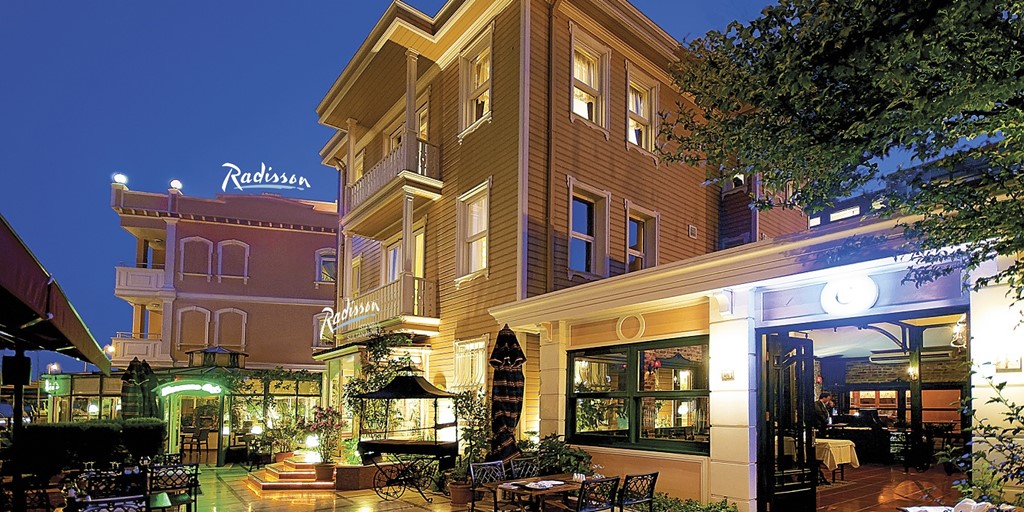 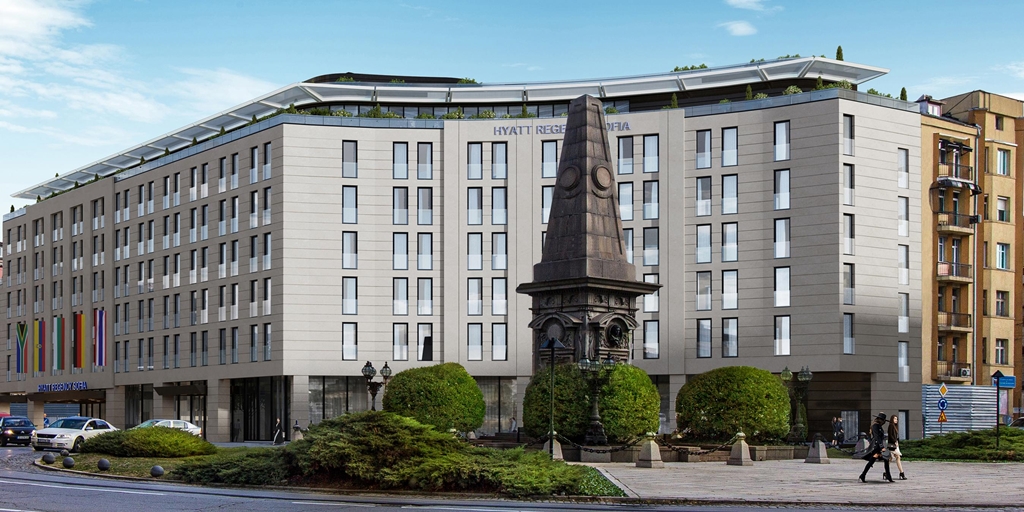 We examine how the development plans of eight of the world’s biggest hotel groups have been affected by the pandemic, using exclusive stats from the TOPHOTELPROJECTS construction database to identify which companies are ramping up or reining in expansion in the post-Covid era.

It’s now abundantly clear that coronavirus has dealt a severe blow to global hospitality, with the introduction of lockdowns and travel bans around the world creating the most difficult trading conditions since the end of WWII.

Our exclusive Q4 2020 Covid development update series sheds some much-needed light on how the industry is responding to these unique circumstances. With the support of the TOPHOTELPROJECTS construction database, we’ve tracked what’s happened to the construction pipelines of eight of the world’s top hotel groups over the last few months: Marriott International, Hilton Worldwide, Accor, IHG, Hyatt Hotels Corporation, Radisson Hotel Group, The Ascott and Wyndham Hotel Group.

Each group boasts a truly global footprint, and had more than 100 active hotel projects at the start of this process (schemes logged as ‘in progress’ by our independent researchers), making them significant players in their own right – as well as useful barometers of what’s going on in the rest of the market.

The top eight are continuing to develop hotels

Below, we’re publishing for the very first time our research into how the development slate of the top eight hotel groups has changed on a month-by-month basis:

*Note: Owing to unforeseen challenges at the outset of the pandemic, the first batch of monthly data was collected on 04/30/2020 for Marriott International and Hilton Worldwide, and 05/13/2020 for Accor, IHG, Hyatt Hotels Corporation, Radisson Hotel Group, The Ascott and Wyndham Hotel Group

The table above shows that the top eight collectively had 3,463 projects in progress as of late April/early May 2020 – when the pandemic was causing huge disruption to key markets across Europe, North America and so on. This figure fluctuated slightly over the course of the following months, before hitting 3,484 as of 2 October. Put another way, it means the total number of active projects has remained broadly flat between late April/early May and the start of October – a far cry from the rapid growth that these hospitality industry heavyweights have enjoyed in years gone by, but equally not the wholesale collapse that some commentators were forecasting in the spring.

We also get a sense of how many projects have been put on ice recently. Our data reveals that 401 projects were on hold as of late April/early May, but that this number increased fairly consistently in the weeks that followed, reaching 469 on 2 October. In percentage terms, this equates to a rather more worrying rise of 17% in around five months, giving us hard evidence to support anecdotal reports that more and more schemes are being suspended as uncertainty in the market begins to take its toll on the ground.

Meanwhile, we have some preliminary answers to the question of whether projects are being thrown out at a faster rate than usual. Our researchers found that 18 schemes were cancelled in the month leading up to 30 April/13 May, compared to 32 in the corresponding period ending 2 October. This is an eye-watering hike of 78%, which will obviously be a cause for concern for everyone connected to hospitality, although in the interests of balance we should point out that these totals can easily be skewed by a single atypical month, so it’s probably too early to identify any long-term trends with confidence at the moment.

Speaking of which, we also need to stress that it was fairly common for projects to fall through even before the pandemic, perhaps because the group and developer parted ways or the construction issues onsite proved to be insurmountable, meaning it’d be inaccurate to blame every misstep on coronavirus. What’s more, the past throws up plenty of instances of ambitious schemes being suspended for months or years on end, before finally being resurrected and successfully realised when market conditions improved; in other words, some of the projects we’ve logged as mothballed may yet be revived.

The top eight are responding differently to Covid19

In addition to considering the top eight hotel groups as a whole, we can also compare how each of them is reacting to the pandemic individually by examining the evolution of their project pipelines over time. Although they’re all facing similar pressures, with coronavirus hitting short-term profitability and disrupting long-term planning like never before, we’re already detecting striking differences in how they’re responding when it comes to future development activity. 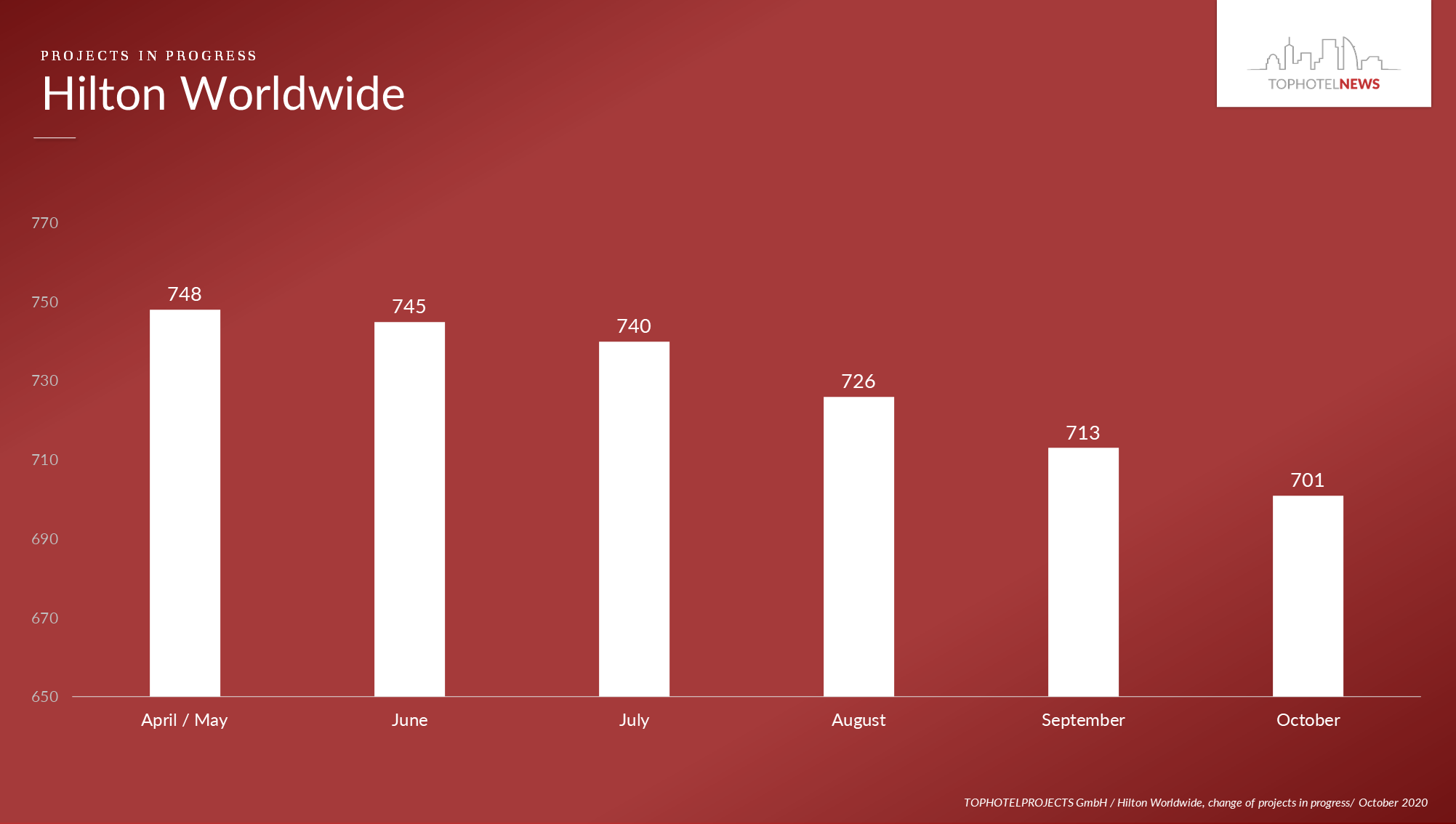 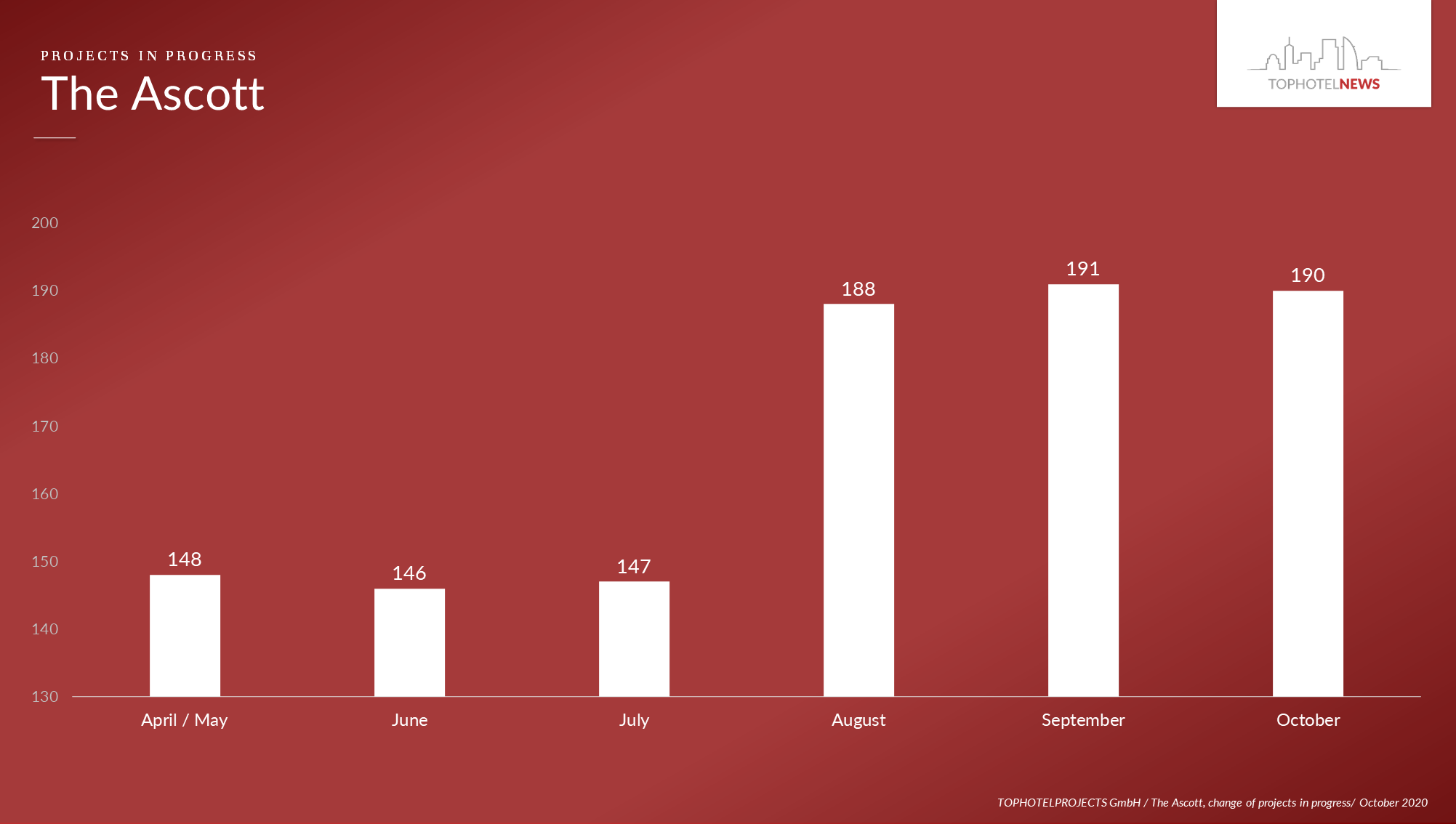 Ascott, Accor and IHG are stepping it up a gear

What’s clear from our data is that Ascott, the Singapore-based lodging owner-operator known for its strong presence in the serviced-residence market, is growing more rapidly despite the pandemic, having added lots of extra projects to its pipeline over the summer.

Similarly, Accor, the French hotel group behind brands like Raffles, Banyan Tree and Fairmont, has been growing its development slate too, albeit in less dramatic fashion. And British hospitality stalwart IHG, whose flags include InterContinental, Kimpton and Six Senses, is ramping up activity levels as well following a strong end to Q3.

Hyatt and Radisson are holding steady

We can also see that Hyatt, the Chicago-headquartered hospitality giant, is continuing to develop properties at a near-identical rate to the early days of the pandemic.

Hilton, Marriott and Wyndham are reining in activity

At the other end of the spectrum, Hilton, the Virginia-headquartered hospitality company whose brands include Waldorf Astoria, LXR and Conrad, is consistently reducing its development slate as the months go by.

Switching our attention to Maryland-based hotel industry heavyweight Marriott, whose extensive portfolio encompasses luxury flags like The Ritz-Carlton, W Hotels and St Regis, here we find another group that’s been steadily trimming its pipeline – although our most recent figures suggest that it’s now creeping back into growth again. Wyndham, the prolific hotel franchisor operating out of New Jersey, has also slowed down construction activity slightly.

Development continues despite some groups cutting back

Overall, our data shows that the top eight hotel groups collectively are continuing to bring forward new projects at a broadly similar rate to the early days of the pandemic, although at the same time we’ve witnessed a worrying increase in the number of mothballed or abandoned schemes.

It’s vitally important, however, that the overall trend doesn’t mask the fact that each group is responding to the crisis very differently, with some stepping up expansion efforts and others reining in activity. Given such contrasting approaches, we’re bound to see big winners and losers emerge pretty quickly – and probably further consolidation in the market too as those that survive and thrive gobble up the less fortunate.

Ultimately, the success or failure of each group’s strategy will depend largely on circumstances outside their control – namely, how quickly scientists can bring Covid19 under control, or at least help populations live alongside the virus more effectively. When it comes to hotel development, the jury’s still very much out on whether confidence or caution will prove the best option in the long run.