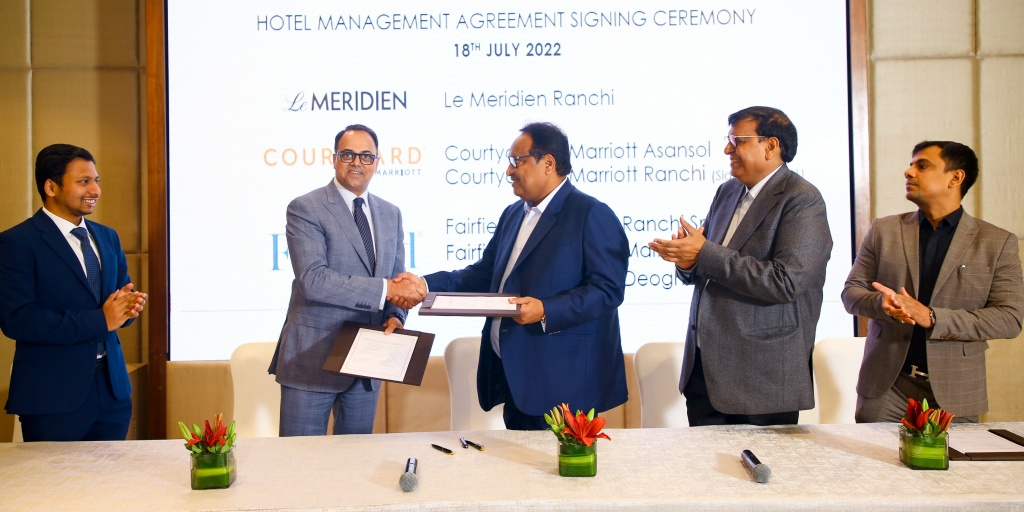 Marriott International has signed an agreement with India’s Beekay Group to bring five new hotels to the country in Jharkhand and West Bengal.

The strategic collaboration is aimed at further strengthening Marriott International’s presence in India with the addition of 700 rooms to its existing portfolio.

Marriott International’s president Asia Pacific (excluding Greater China) Rajeev Menon said: “We are thrilled to be working with the Beekay Group again to bring five new hotels to Jharkhand and West Bengal. With this multi-agreement signing, we are looking to urbanise and enter emerging business locations, in some of the most commercially and culturally important cities of the East. This strategic collaboration in the state encompasses properties spanning our premium lifestyle segment to select service brands that will enable us to better cater to our guests’ needs, while further strengthening our presence in India.”

Bishnu Kumar Agarwal, CMD, Beekay Group, added: “It is my pleasure to have forged this strategic collaboration with Marriott International and we are thrilled to welcome them to the Beekay family. May this mark the start of a collaboration that grows from strength to strength in the near future. We are eagerly looking forward to the opening of the first Courtyard by Marriott in Ranchi, followed by the other Marriott International hotels set to open in quick succession across Ranchi and the state of Jharkhand.

“These hotels will provide world-class service and hospitality to travellers arriving in Jharkhand and are a testament to our belief and confidence in the market and our commitment towards the overall development of our beloved state and the country. It will also help put our state on the tourism map of India.”

Bringing the Paris-born Le Méridien brand to Ranchi, East India, the 175-key Le Meridien Ranchi will form part of a mixed-use project that combines residential, retail and office development, and is expected to open in 2025.

Courtyard by Marriott Asansol will also be part of a mixed-use development project that comprises a retail mall and hotel. With 140 modern, well-designed rooms and facilities, the hotel is scheduled to open in 2026.

Completing the Fairfield trio, Fairfield by Marriott Deoghar is expected to open in 2025 in close proximity to cultural and historical landmarks in the city including the Naulakha Temple and the Baba Baidyanath Temple.

The Indian tourism and hospitality industry has seen a paradigm shift in recent years where an increasing number of travellers are opting for upper-midscale hotels. Marriott believes the addition of these five hotels further highlights its commitment to expanding its footprint in India. Marriott International currently operates 131 hotels in India across 16 brands. According to the TOPHOTELPROJECTS database, Marriott brands have at least 29 projects in progress in the country.

Furthermore, the Beekay Group also owns the 112-key Courtyard by Marriott Ranchi, signed, and announced earlier in 2021. It is scheduled to open its doors in 2025.