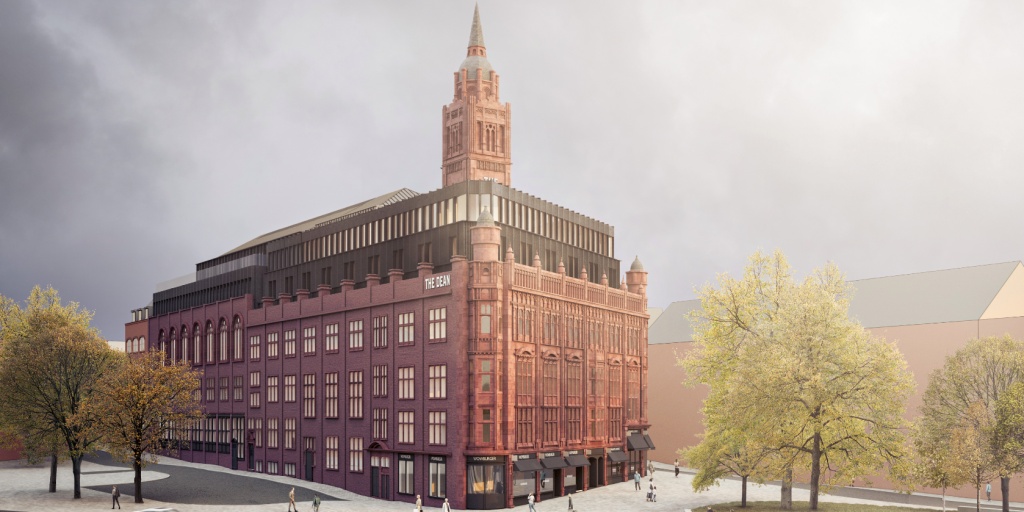 Rendering of The Dean Birmingham, courtesy of Press Up Hospitality Group.

Ireland-headquartered Press Up Hospitality Group and sister company Oakmount have been granted planning permission to convert a Birmingham landmark into a hospitality destination.

The scheme will include a 150-room boutique hotel under the group’s Dean brand – the first site outside Press Up’s native country.

The Dean Birmingham will include the brand’s signature features including Sophie’s Rooftop Restaurant and Terrace, a luxury Power Gym, and an art collection which is curated to celebrate local artists.

The hotel will be housed within the city’s Grade II* Central Methodist Hall, with Birmingham City Council approving plans to retain the ‘distinctiveness’ of the building while improving its appearance. The property was originally constructed in 1904, and served as the Que Club between 1989 and 2017, attracting major artists such as David Bowie, Daft Punk and Blur.

Within the redevelopment will also be eight new bars and restaurants plus a gym at ground and basement levels. Proposals call for Central Hall to incorporate a 1,500-seat event space, with the pulpit area redefined as a stage for visiting acts. In addition, a traditional members’ club cocktail lounge, two expansive external terraces and a flagship rooftop restaurant with panoramic views across the city are part of the programme.

Todd Architects has been appointed architect of the project, while structural and civil engineering practice Heyne Tillett Steel will deliver the low carbon solutions to the site. O’Donnell O’Neill design studio will also be creating the innovative interiors within the building.

The proposed three-storey rooftop extension will be set back from the parapet and terraced backwards as the volume rises. A single-storey extension to the south will also be set back from the parapet and above this rests a new restaurant with a pitched roof matching the form of the original. The new elements make explicit reference to the qualities of the original building, whilst also utilising modern methods of construction and material technologies.

Seamus Lennon, principal, Todd Architects, commented: “We are thrilled to see our hotel-led proposals for the refurbishment of Birmingham Central Methodist Hall granted approval a mere six months on from our client having completed on the building. The Central Methodist Hall offers the opportunity to mix the height of Victorian grandeur with a fresh and contemporary take on the modern hospitality offer.

“Whilst it remains necessary to extend the building vertically to ensure the project is commercially viable, Birmingham City Council planners recognised our proposals will ensure this is done sensitively and allow the full restoration of the Central Hall space to be enjoyed by generations to come.”

Press Up and Oakmount’s UK head of business development and new opportunities, Jessica Carlyle-Clarke said: “We are thrilled to have been granted planning permission for Press Up Hospitality Group’s biggest UK project to date in this iconic landmark building in Birmingham. This is the start of a very exciting time for the group.”

The Dean boutique hotels offer design-led, high spec rooms at affordable prices right in the centre of town, all served up with modern, genuine Irish hospitality by people who love their city.