According to the TOPHOTELPROJECTS database, nearly 27,000 extra hotel rooms will become available in India over the next few years.

A total of 177 projects are due to be completed in cities including Bengaluru, Jaipur and New Delhi.

Development should remain steady, with this year witnessing the opening of 36 hotels, collectively representing 5,539 rooms. Next year the total jumps somewhat to 58 hotels, but with only a further 7,917 keys, this suggests more of the proportion is either smaller developments, or contains fewer, more expansive rooms. The ratio of projects to rooms then moves back to 2022 levels for 2024, with 29 slated sites delivering 4,545 keys. Finally, 2025 and beyond is currently scheduled to produce another 54 hotels of 8,883 rooms in total.

Bengaluru tops the city development stakes, with 10 projects on the slate creating an additional 2,103 rooms. Close behind is Jaipur, with nine projects and 1,523 keys collectively. In the bronze medal position we have New Delhi, which will benefit from six new hotels comprising 2,055 rooms.

Two Indian Hotels Company Ltd subsidiaries lead the way in terms of brands, with both Taj and Vivanta by Taj bringing an extra 15 hotels to market, though the former will be adding a total 2,337 keys and the latter’s developments will comprise 2,276 rooms. IHG Hotels & Resorts’ Holiday Inn Hotels & Resorts rounds off the top three with 10 projects creating another 1,244 rooms. 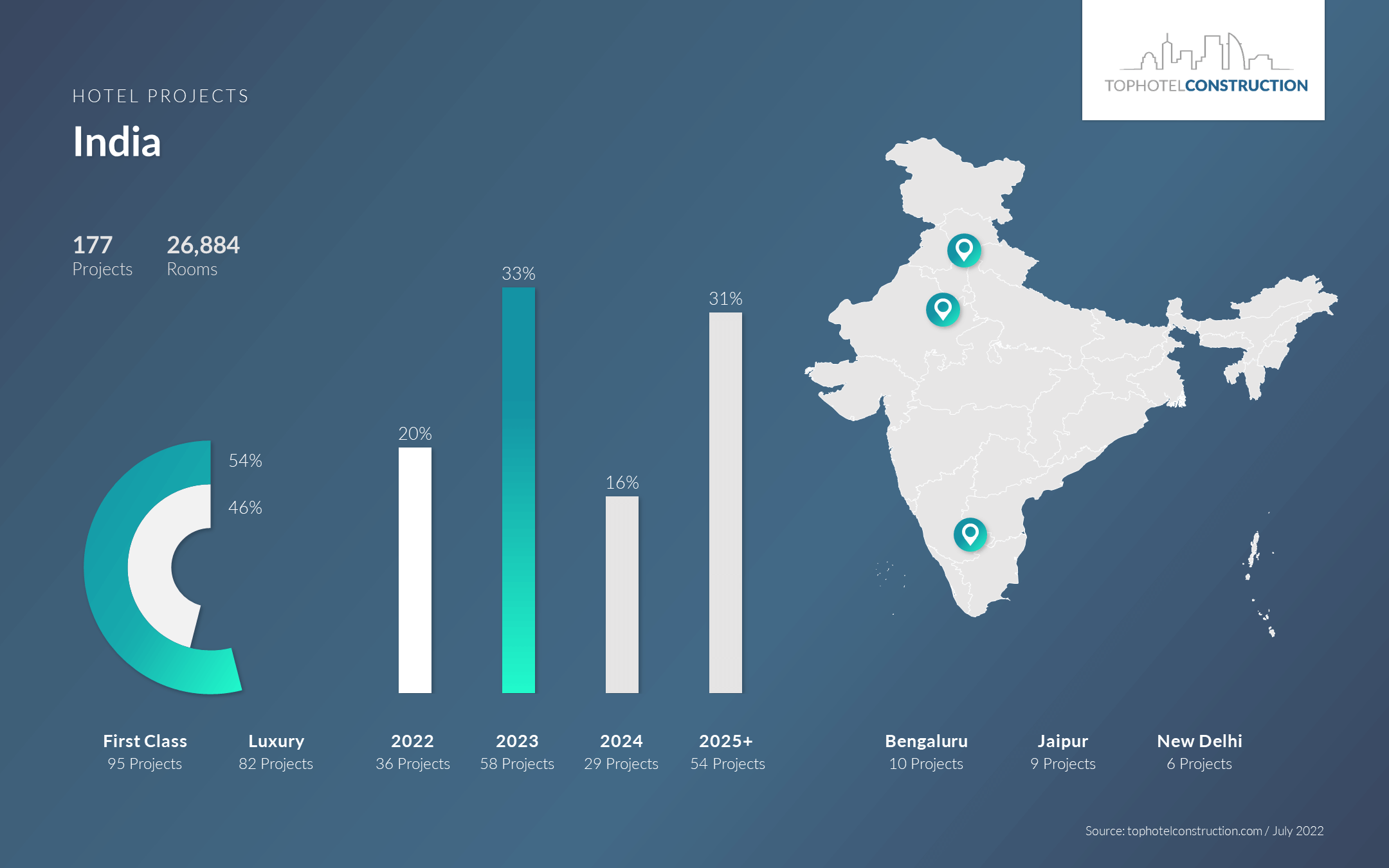 Hilton’s recently-announced project will span 15 acres of land, housing 115 guest rooms and 13 villas with private plunge pools along with an array of lifestyle amenities.

Highlights of this modern architectural property surrounded by green lawns are to include multiple dining outlets, a bar, a fitness centre and spa, as well as banquet and meeting space for corporate and celebratory events. It is due for completion in 2025.

Deutsche Hospitality’s latest development in India’s third most populous city will open its doors in Q1 2024. Set within the Zephyr mixed use development, the hotel will encompass 178 rooms and suites and 123 luxury serviced apartments.

Specialty restaurants will include all day dining Chinese, Indian, Italian, tea-lounge, club lounge, private/exclusive club and lounge bar venues. The Steigenberger-branded hotel will host 24,000 sq ft of convention space and a 12,500 sq ft spa area offering a salon and pool. Outdoor sports facilities will include a tennis court and a jogging track.

Architects Steelman Partners are developing the design, while interiors will be created by super-luxury specialists, Studio Papiri International.