A deep dive into the TOPHOTELPROJECTS construction database reveals that almost 250 hotel schemes will complete this month, with the US and China leading the charge.

Our in-house research team has discovered that 243 hotel projects with a total of 52,245 rooms will be ready around the world in March 2022.

The US beats China and India

The most active country overall this month is the US, where an impressive 54 properties and 11,321 keys are expected to open. This puts it well ahead of runner-up China (34 hotels, 8,354 rooms) and third-placed India (16 schemes, 2,645 keys) in the development stakes. 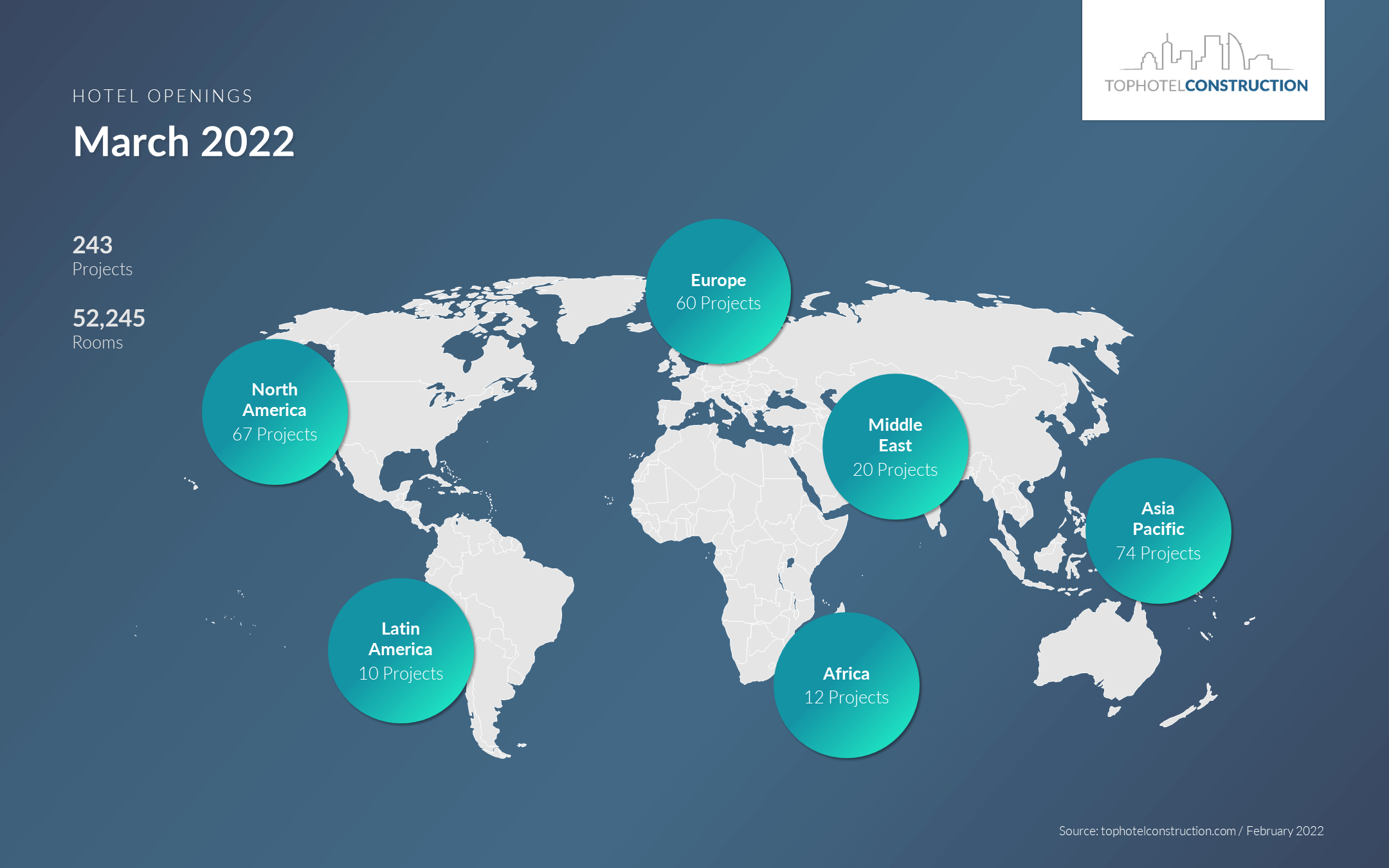 A real boost for the luxury hotel industry

March is also shaping up to be a rather big month for luxury hospitality. We’ve found that 93 projects with 24,403 rooms are targeting the most prestigious five-star market, leaving 150 schemes and 27,842 keys focusing on the four-star sector.

Elsewhere, Marriott International certainly has plenty on its plate, as the Maryland-headquartered hotel group comes first and second in our rankings of the world’s most active hotel brands. Marriott Hotels & Resorts has no fewer than seven openings and 2,076 keys earmarked for launch this month, just pipping stablemate Aloft Hotels, which is eagerly awaiting the arrival of six projects with 802 rooms. DoubleTree by Hilton, part of Hilton Worldwide’s extensive portfolio, takes third courtesy of its tally of five schemes and 815 keys.

Now let’s turn our attention to a couple of this month’s most exciting launches.

A development that’s already generating plenty of buzz is Four Seasons Hotel and Residences Fort Lauderdale in Florida, which will feature 189 hotel rooms and suites plus 42 Four Seasons Private Residences. The building’s yacht-like architecture is being brought to life by Kobi Karp Architecture and Interior Design, while Tara Bernerd & Partners is working on the interiors, Martin Brudnizki Design Studio is focusing on crafting the property’s expansive Ocean Terrace with pool experience and oceanfront restaurant Evelyn’s Table, and Fernando Wong Outdoor Living Design is concentrating on the outdoor spaces. There’ll also be an all-day lobby lounge, spa, dedicated level of event spaces and restaurant overlooking Fort Lauderdale Beach Boulevard, which will debut later in the year.

Another project that really catches the eye is Tours Duo Paris MGallery by architect Jean Nouvel in the ZAC Paris Rive Gauche district of the French capital’s 13th arrondissement. Part of a striking mixed-use scheme comprising neighbouring 39- and 27-floor towers, MGallery’s latest outpost will showcase the talents of designer Philippe Starck, and feature 139 rooms and suites in total. Among the amenities being promised here are a restaurant and a bar with its own terrace providing exceptional views across the City of Light.