New York has always attracted scores of travellers, be it for business or leisure. This meant that the city’s hotel market has always been among the fastest-growing in the country.

In the coming years, this is likely to stay the same. For now, 68 hotels with 17,801 rooms are in the city’s pipeline.

We find out more about when these properties will launch and which ones to keep an eye out for.

While the COVID-19 situation will force many developers to postpone their openings, the overall atmosphere remains hopeful that construction and pre-launch activities will be able to continue soon.

If everything were to go according to plan, 33 hotels with 8,025 rooms will open in New York this year. However, especially the hotels currently under construction may suffer delays of around six months or more, given the many restrictions put into place to combat COVID-19. The 5 hotels currently in their pre-openings phase may still be able to make it this year, provided the situation improves.

Without spillover from 2020, 2021 will have 14 openings with 4,142 rooms. Even here, delays are possible, since construction on many projects has halted. The same goes for 2022 and the 6 planned launches with 3,095 rooms. For now, only time will tell how quickly these projects can move forward.

This trend is reflected in the brands which are developing their presence in the city most aggressively.

Marriott Hotels & Resorts takes the lead with 3 projects and 1,431 rooms. Aloft Hotels and Hampton by Hilton will both also open 3 properties, but with 907 and 805 rooms respectively. Hotel Indigo and Six Senses will both get 2 new properties.

The largest hotel scheduled to debut in New York is the 974-room Midtown Manhattan Times Square slated for Q2, 2022. Planned amenities at the new hotel include dining facilities, a hotel bar and lounge, a laundry room for guests, bike storage and a coffee bar. Facilities such as hotel offices, linen rooms, storage rooms and garbage facilities will mostly be located underground, according to building plans.

By Q2, 2021, the 123-room aloft New York Chelsea North is slated to open its doors. Located across from the Jacob K. Javits Center between West 36th street and West 37th Street, the hotel will be set atop a podium which will be home to almost 20,000 square metres of commercial space. Hotel facilities will include an outdoor terrace overlooking the Hudson River as well as dining venues and the signature services and amenities guests expect from aloft properties.

The 500-room Virgin Hotel planned for 2020 will be one of the largest and tallest hotels south of Midtown. Its rooms will rest on a glossy 8,300-square-metre podium stocked with dining and drinking establishments, outdoor terraces, meeting rooms, lounges and a fitness centre. Swingers, an upscale indoor miniature golf course that serves cocktails and street food, has leased 2,000 square metres of retail space in the basement for its first American location.

Set to open later this year, the 285-room Ace Hotel Brooklyn will offer guests a design-led stay experience in one of Brooklyn’s best neighbourhoods. Apart from a restaurant and bar, the property will also house retailers, a radio station and a ‘winter garden.’ Four event spaces will be available on the second floor while a gym, offices and a business centre can be found on the third floor. 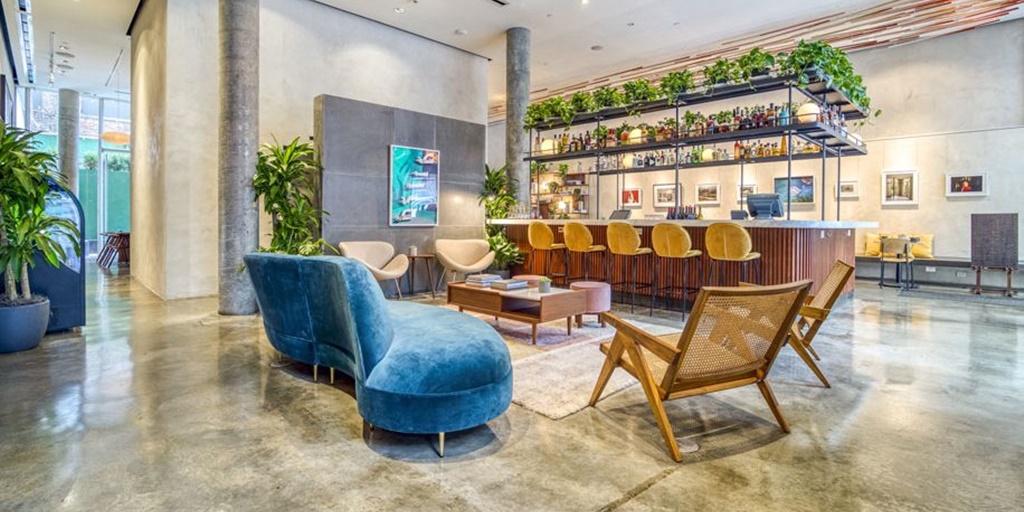