Radisson brings a taste of Scandinavian style to southern Russia

A 169-room Radisson hotel has opened in the city of Rostov-on-Don, making clever use of natural materials to reflect the upscale brand’s Scandinavian-inspired aesthetic.

A stylish international hotel brand has opened its latest outpost in one of southern Russia’s largest cities.

Designed for business and leisure

The 169-key Radisson Hotel Gorizont Rostov-on-Don is now hosting guests in accommodation ranging from standard rooms to two-bedroom suites with panoramic views, all incorporating comfortable workspaces, high-speed wifi and convenient coffee machines. Designed in a modern Scandinavian style with abundant use of natural materials like wood and stone in soft tones, the hotel combines Radisson brand standards with elements that harmonise with the rest of the Gorizont mixed-use scheme.

A collaboration between Radisson Hotel Group and Commercial Complex Gorizont, the project is integrated with the Gorizont shopping mall, the 13-screen Cinema&Emotion movie theatre and the H2O Aquapark via a transition gallery, enabling guests to indulge in some retail therapy, watch a film on the big screen or go for a swim without ever leaving the building. It’s also close to the city centre, offering easy access to popular sights like Bolshaya Sadovaya Street and Chernova Mansion.

The hotel, led by general manager Natalia Evgrafova, boasts a second-floor restaurant serving breakfast, lunch and dinner, as well as a multifunctional conference room accommodating up to 250 people and five meeting rooms with audiovisual equipment.

David Jenkins, vice president of business development for Radisson Hotel Group, said: “We are delighted to add a second hotel to our portfolio in Rostov-on-Don, which has become one of Russia’s most popular holiday and business destinations over the past few years. Radisson Hotel Gorizont Rostov-on-Don is our third hotel in Russia under the upscale Radisson brand and it fits to all of the brand’s standards.”

Dan Polonsky, general director of Gorizont Shopping Mall, added: “The hotel has become part of a large recreational and retail infrastructure, which already includes the Gorizont shopping mall, the Gorizont Cinema&Emotion multiplex and the H2O waterpark. As a result, hotel guests have access to all 350 shops, restaurants and entertainment, starting from the cinema and waterpark and ending with all entertainment centres inside the mall.” 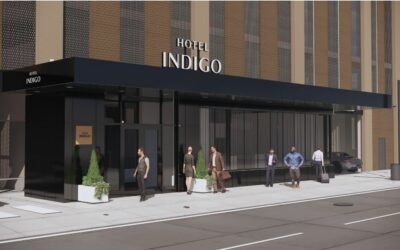