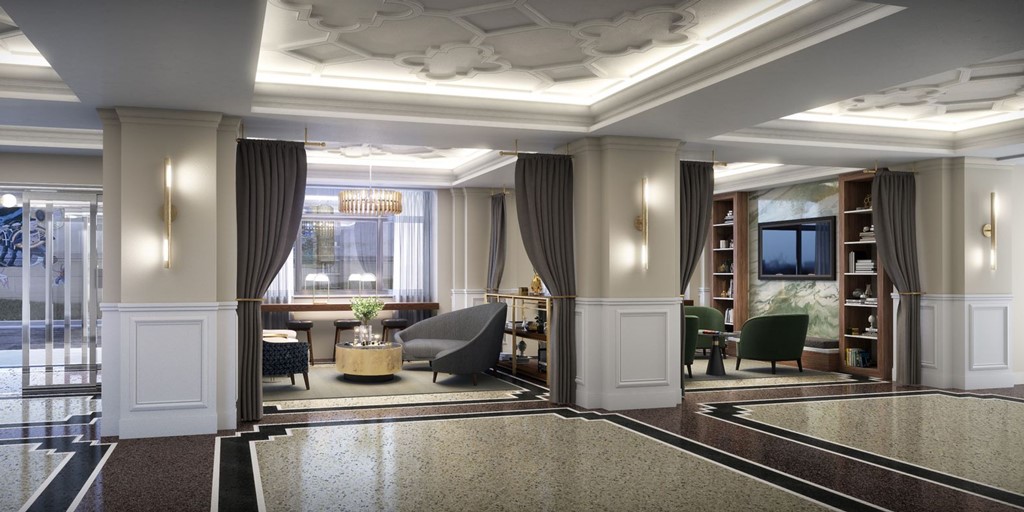 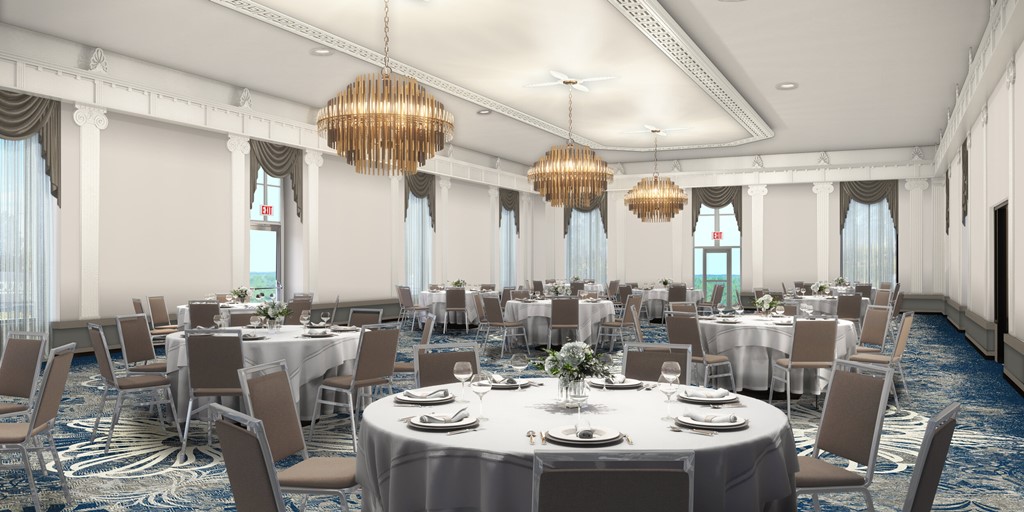 Brought to life by a design team that includes Interior Image Group and Joseph A Dzierla and Associates, Hotel Elkhart, Tapestry Collection by Hilton in Indiana is now welcoming guests.

A historic building in the city of Elkhart, Indiana has come full circle.

Cressy Commercial Real Estate and partner Mno-Bmadsen, the non-gaming investment arm of the Pokagon Band of Potawatomi Indians, have announced the grand opening of Hotel Elkhart, Tapestry Collection by Hilton – marking the end of several decades of alternative use for the property, which was originally built as a hotel in 1923.

This historic hotel on Main Street was frequented by many notable figures down the years, not least Ed Sullivan and Robert Kennedy. However, the hotel closed in the early 1970s, and the site has since been used for offices, apartments, restaurants and shops.

“The redevelopment of this complex project was not an easy task,” said Edward Bradley, partner and senior vice president of Cressy Commercial Real Estate. “It required the commitment, perseverance and partnership from both the public and private sectors to bring it to fruition.

“This includes the love and support of so many from the Elkhart community who share Hotel Elkhart’s long and rich history. How fitting that we stand together here today celebrating the rebirth of the Hotel Elkhart nearly a century after its initial opening.”

The project’s contractor was Cressy Commercial Development, with interior design led by Interior Image Group, and Joseph A Dzierla and Associates holding responsibility for architectural services. Hospitality operations management is being overseen by Cornerstone Hospitality.

The newly opened hotel comprises 93 guestrooms, along with two restaurants, a ballroom, meeting space and a rooftop bar. Travellers can dine at breakfast, lunch and dinner in Relish Café & Convections, highlighting artisan makers and local produce, and enjoy cocktails with small plates at The Corner Bar at the intersection of Main Street and Marion Street.

The ninth-floor Aria Ballroom and Prelude pre-function space caters for weddings as well as corporate events, and this area is joined by several small meeting rooms and boardrooms. Another highlight of the hotel is its rooftop bar, The High Note.

As part of the preservation of the building’s historical features, the original relief mouldings, cornices and terrazzo floors were all retained.

Kimberly Christner, president and CEO of Cornerstone Hospitality, said: “When you have the opportunity to renovate a building that is almost 100 years old, that opportunity comes with the responsibility of ensuring the renovation maintains the authenticity of the building. This type of property has a storied past and has endured in its footprint serving the citizens of Elkhart for almost a century.

“Telling the history of this community in a creative way that engages with visitors and leaves a lasting and positive impression of Elkhart is what makes these properties successful. Hotel Elkhart is the Grand Dame of downtown Elkhart and we’re excited to start making new stories with the guests who stay with us as well as the Elkhart community.”

MGallery dips its toe into Uruguay

The resort specialist has pledged to provide a “year-round mountain vacation experience” at the Lemaymichaud-designed scheme - and outlined plans to launch a new project in Utah. A stylish property aimed squarely at outdoor enthusiasts has started welcoming guests in...

Whitworth Locke (imagery: © Nicholas Worley) For our latest TOPHOTELDESIGN exclusive, we look at a stylish 160-studio aparthotel in northern England, which was created to satisfy the needs of contemporary travellers. This creative scheme successfully marries old and...

Tapestry Collection by Hilton is a gathering of original hotels chosen because of a commitment to being anything but generic.