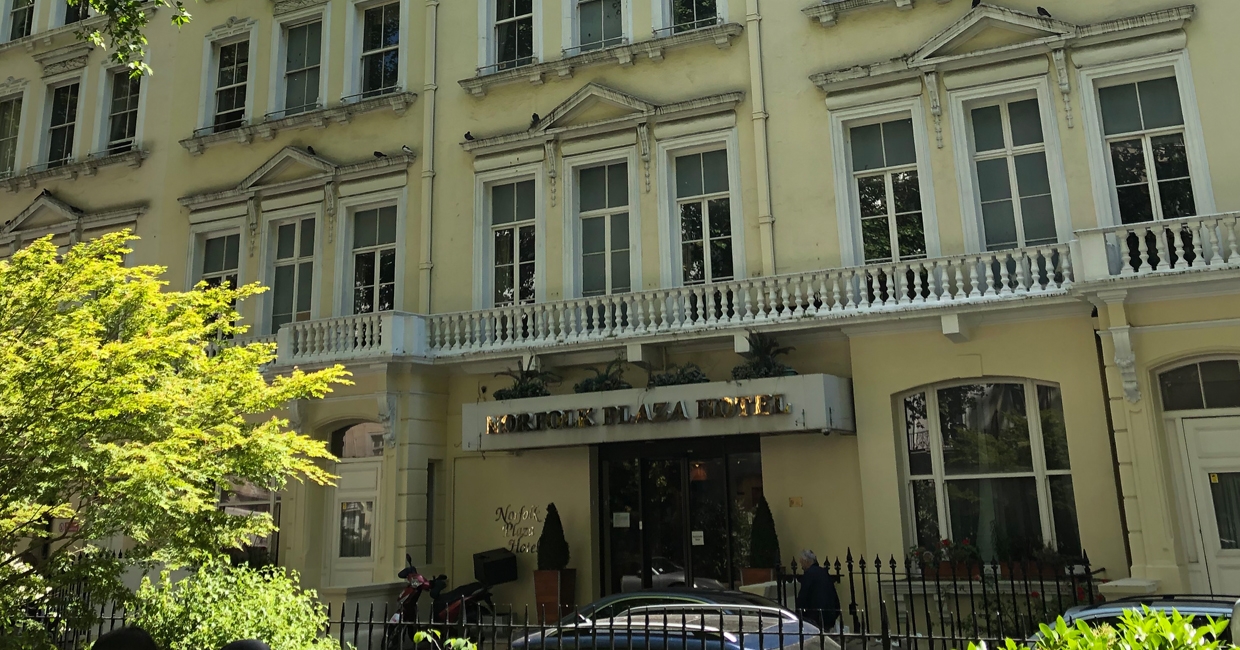 The exterior of the Norfolk Plaza Hotel in Paddington.

Dexter Moren Associates have been granted planning permission to upgrade and convert a former Paddington hotel into a 4-star property.

Dexter Moren Associates (DMA) has revised an existing planning permission to gain approval for a scheme that will upgrade the facilities of the Norfolk Plaza Hotel in Paddington to an 87-key 4-star property. We take a look inside Dexter Moren’s plans for the Grade II Listed property.

A historic hotel for a new generation

The former Norfolk Plaza Hotel is a collection of three Edwardian townhouses overlooking a leafy square in the Paddington area of London. Located in the upper class borough of Westminster, the three properties were converted into one hotel in the 1970’s, but given the changing lifestyle trends, demographics and travel patterns of today’s guests, the hotel as it currently stands is not fit for purpose.

Hospitality design experts Dexter Moren Associates were brought on board by the client Kulkoni Import + Export GMBH to be in charge of the interior architecture and design of the new and improved hotel.

Dexter Moren Associates submitted a revised planning application which expanded and improved upon an existing application that had been granted to upgrade the hotel’s facilities and give a room count of 80. DMA’s new proposal involved a redesign which would increase the key count to 87 by reconfiguring the internal layout to make servicing and access easier, with the addition of a second staircase a key component in the new design.

The new scheme has been granted planning permission, and certain cosmetic interventions will also be made as part of the proposal, such as replacing the rear sash windows to match the originals, adjusting the proportions of the entrance canopy to be in harmony with the rest of the facade, and a reorganisation of the interior rooms to align more closely with the existing Edwardian structure instead of the 1970’s amalgamation.

Paul Wells, Partner at DMA, says, “Our design respects the structure of the original three townhouses, retaining elements such as an original staircase and designing the front of house areas so the former three townhouses can still be read. At the client’s request, we opened up the ground-floor layout to create a connected lobby and library, maximising the space and offering a strong, welcoming first impression.”

Contemporary spaces for the modern traveller

Wells explained that “this scheme further builds on our strong track record of creating deliverable hotel projects that can achieve commercial success. We took on a scheme and through our experience, ingenuity and carefully considered design we have developed a workable layout responding to regulatory and brand requirements, whilst meeting all the client’s key requirements.”

The client wanted a redesign that would appeal to the contemporary traveller, and this required adding in spaces that had not previously existed within the building. DMA set about conceiving of a multifunctional lobby space which would accommodate co-working as well as casual retail and dining, facilitating the modern travel experience and responding to the demands of compact spatial planning in central London.