The hotel has 120 luxurious rooms, and the restoration unites five of the prison buildings as well as creating some new additions that combine to result in a harmonious blend of old and new

A former prison dating from the Ottoman era has been converted into a luxurious hotel in the Israeli capital of Tel Aviv. We take a look inside the renovation of this incredible property.

From prison to hotel

The new Setai-Tel Aviv hotel in the city’s Jaffa neighbourhood is something of a wonder. Located in a 19th century former prison, the hotel is an exercise in the mastery of reinvention. Built by the Ottoman Turks during the Ottoman era, the new hotel is located on the site of what used to be a fortress from the Crusader era on the northern corner of the city walls. This prestigious setting is perhaps somewhat unwittingly a prime location for a hotel, as its position on this rocky bluff affords guests spectacular, uninterrupted views out over the sparking Mediterranean sea. The hotel also benefits from proximity to Jaffa’s port, as well as Tel Aviv’s Mediterranean coastline and beaches.

The hotel has 120 luxurious rooms, and the restoration unites five of the prison buildings as well as creating some new additions that combine to result in a harmonious blend of old and new. The Setai-Tel Aviv was funded by Nakash Holdings (of which investor Joseph Nakash is a part), and is a member of The Leading Hotels of the World’s, and its style, charm and elegance all make it deserving of this position.

This 5-star hotel oozes history and character through its every pore. Restored by Feigin Architects with interiors by London-based design practice Ara Design led by Andre Avedian, the original building, which was called a “Kishle”, or jailhouse in Turkish, retains much of its existing charm. Original stonework and marble has been carefully maintained and refurbished where necessary, and the architects recreated some areas such as windows and doors that could hardly be distinguishable from the original elements, such is the quality of the work.

The building underwent a 20+ year preservation process led by the Israel Antiquities Authority, and craftsmen specialising in woodwork, masonry and metalwork were all involved in the careful conservation and restoration of this stunning property. Marble and stone corridors connect the buildings, and the prison yards are now beautifully transformed entrance courtyards at the front and the rear of the building. A large archway at the entrance entrance bears the original seal of Abdul Hamid II, 34th Sultan of the Ottoman Empire, a historic detail indeed.

Two additional floors have been designed to reflect the existing building, but some modern touches such as the swimming pool and four glass perimetered terraces bring it into the 21st century. The guest rooms and suites are comfortable yet decadent, with leather and oak being the order of the day in terms of the material palette. Bruno H. de Schuvter, General Manager of the Setai Tel Aviv, says, “The 13th century structure that is the foundation of the new hotel is unlike any other, and we took meticulous care in preserving and infusing important historic elements into the transformation of the building.” 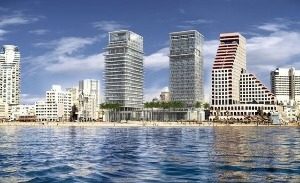 [tweetshareinline tweet=”The hotel has 120 luxurious rooms, and the restoration unites five of the prison buildings as well as creating some new additions that combine to result in a harmonious blend of old and new” username=”tophotelnews”]