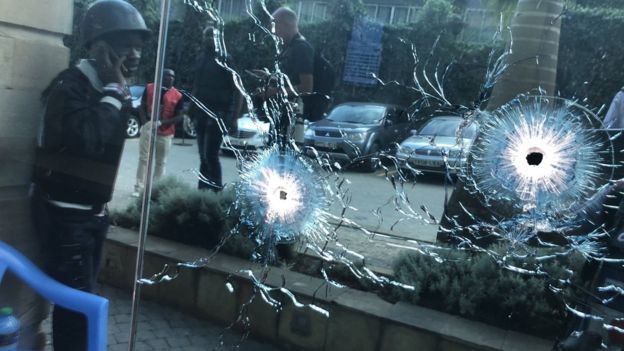 According to eyewitnesses, between four and six armed gunmen entered the premises in the Westland district of the city, which houses the DusitD2 hotel and several offices.

Explosions were followed by the sounds of gunfire. Kenyan security services are conducting operations to neutralise the threat.

The Somali-based militant group al-Shabab claimed responsibility for the attack through their own media outlets.

According to latest reports from the ground, one man has been rushed to hospital to treat a gunshot wound to the back. Vehicles were seen on fire in the compound parking of DusitD2.

Kenyan police chief Joseph Boinnet has called the events at the Nairobi hotel a “suspected terror attack,” adding they were tallying the number of casualties and injured.

The attackers are still believed to be inside the building.

However, Boinnet called on citizens of the city to “remain calm” as forces were screening and evacuating those trapped inside the premises.

As the assault unfolded, several hotel staff and guests barricaded themselves in rooms and offices, while others were escorted to safety by heavily armed Kenyan police.

One eyewitness told Reuters news agency: “I just started hearing gunshots, and then started seeing people running away raising their hands up and some were entering the bank to hide for their lives.”

Witness Daniel Kulecho told BBC: “I left work quickly to pick my daughter to safety from school, about 1km away from Dusit. Our office safety team has organised a WhatsApp roll call for people to respond with safe.”

The five-star DusitD2 hotel has 101 rooms. Located in the Westlands suburb, minutes from the capital’s business district, it has its own spa and several restaurants.

This attack is the latest in a string of terror assaults Kenya has suffered in recent years.

In September 2013, 67 people were killed when al-Shabab gunmen attacked the Westgate shopping mall in Nairobi in an 80-hour siege.

KTN News is live streaming coverage of this incident on its YouTube channel.